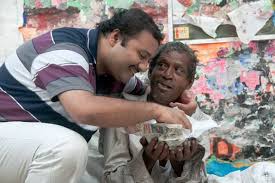 A Chef for the Homeless
In 2002 I was a rising chef in a star hotel in Bangalore, India. I had a dream offer to
work as chef in a 5­star hotel in Switzerland. Before I left the country, my parents asked
me to visit them in Madurai, my hometown in Southern India. I took a four day break to
visit my parents. The first day of my visit, on my way to the temple, I encountered
something that changed my life.
I saw a old man eating his human waste out of hunger. I was shocked. I was driving the
car, and my parents and sister were with me. I immediately stopped the car, found the
nearest hotel and bought idlis (steamed pancakes). When I gave it to the old man, I saw
this amazing gratefulness in his eyes. I have never forgotten that moment. I could not
focus on the Gods in the temple. As soon as I went home, I made yogurt­rice and
brought it to the old man. I continued to feed him for the next four days..
Back in Bangalore, I could not focus on my job. When the time came for me to leave to
Switzerland, I abandoned my plans and returned to Madurai. Like most major cities in
India, there were a great number of mentally ill, destitute, homeless people in Madurai.
I used my savings to feed as many people in need as I could. When my parents came
to know what I was doing, they were very upset. When they could not convince me, they
decided that I had to be either exorcized or taken to a psychiatrist. I requested my
mother to accompany me in my efforts for just one day, and if she was still not
convinced, I would take psychiatric help. That day, when we went out to feed the
hungry, I asked my parents to hand the food. Some of the people I had been helping
told them that if not for me they would be dead. When we returned home that evening,
my mother said, “Krishnan, you go ahead and feed those people. I will feed you as long
as I live”
And that is how my journey started. It would have been easy to ignore the old man
eating his human waste. Most people do. But think about it. How long will it take to go
from giving to receiving? It takes conviction to do what is right. And there are bound to
be challenges­ financial, social and emotional challenges. But I make it a point to give
them the human experience along with my food. They need to know that someone
cares, and that they too have dignity. I would bring them home, wash them. Many of
these destitutes have not had a haircut in ages. I initially found it very difficult to get
barbers to help these people. Even with the one or two barbers I managed to convince,
I could not get the destitutes to get a haircut. The trust was not there. To overcome this,
I went to barber school for 6 months. Now I can give ten different styles of hair­cut.
I come from a chaste social caste. People in my caste are not allowed to touch or
interact with the kind of people I was helping everyday. A few years after I had started
doing my service, some members of my community came up to voice their objection to
my lifestyle. I responded by burning my sacred thread, the tie to my caste and religion. I
no longer identify myself by caste or religion. I am just a simple human being on a
mission.
Back in 2002, with my personal savings, I was able to feed around 30 people a day. To
day, thanks to the generosity of people around the world, we have distributed more than
2.5 million freshly cooked meals. Akshaya home is a shelter for the homeless and
mentally ill to find physical and mental sustenance. Residents of Akshaya home get
medical attention, physiotherapy and freshly prepared food. Above all they are able to
live with dignity. Phase­I of Akshaya home was opened in May 2013. We currently
house 450 residents in our home. Phase­2 of Akshaya homes is underway, and will
house another 400 or so residents when completed.
We all have plenty of things to share. We only need to look into our garages to see how
many things we do not need. If only each one of us makes a commitment to give, there
is no limit to the difference we can make in the world.
Reflections/ Practices
Be cognizant of what the world needs. Cultivate a habit of giving. Afterall, even the air
we breathe is borrowed. See life as an opportunity for giving.The joy of giving must be
experienced. Before you buy anything, ask yourself ‘Do I need it, or do I want it?’
You may need a watch, but don’t need a Rolex watch. What you consider as trash
could mean the life for someone else. We are all equal. Everybody has 5.5 litres of
blood. A poor man may have ten dollars, a rich man may have a million dollars. What
differentiates them is only zeroes. The only universal currency is love. When we learn
to cultivate true love nothing is impossible. 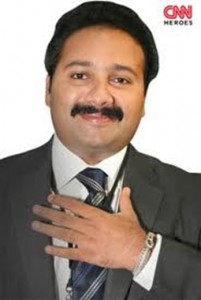 Narayanan Krishnan was recognized as one of the World’s Top Ten Heroes of 2010 by
CNN. Krishnan is the founder of Akshaya trust (www.akshayatrust.org) Akshaya is
committed to the care of the helpless, forsaken, mentally ill, old, sick, roadside destitute
living and dying on the streets of Madurai, India by providing healthy food, love, and
opportunity to rehabilitate, thereby restoring human dignity. Akshaya has earned a solid
trust and growing recognition from the regional and International communities.

View all posts by Immanual Joseph